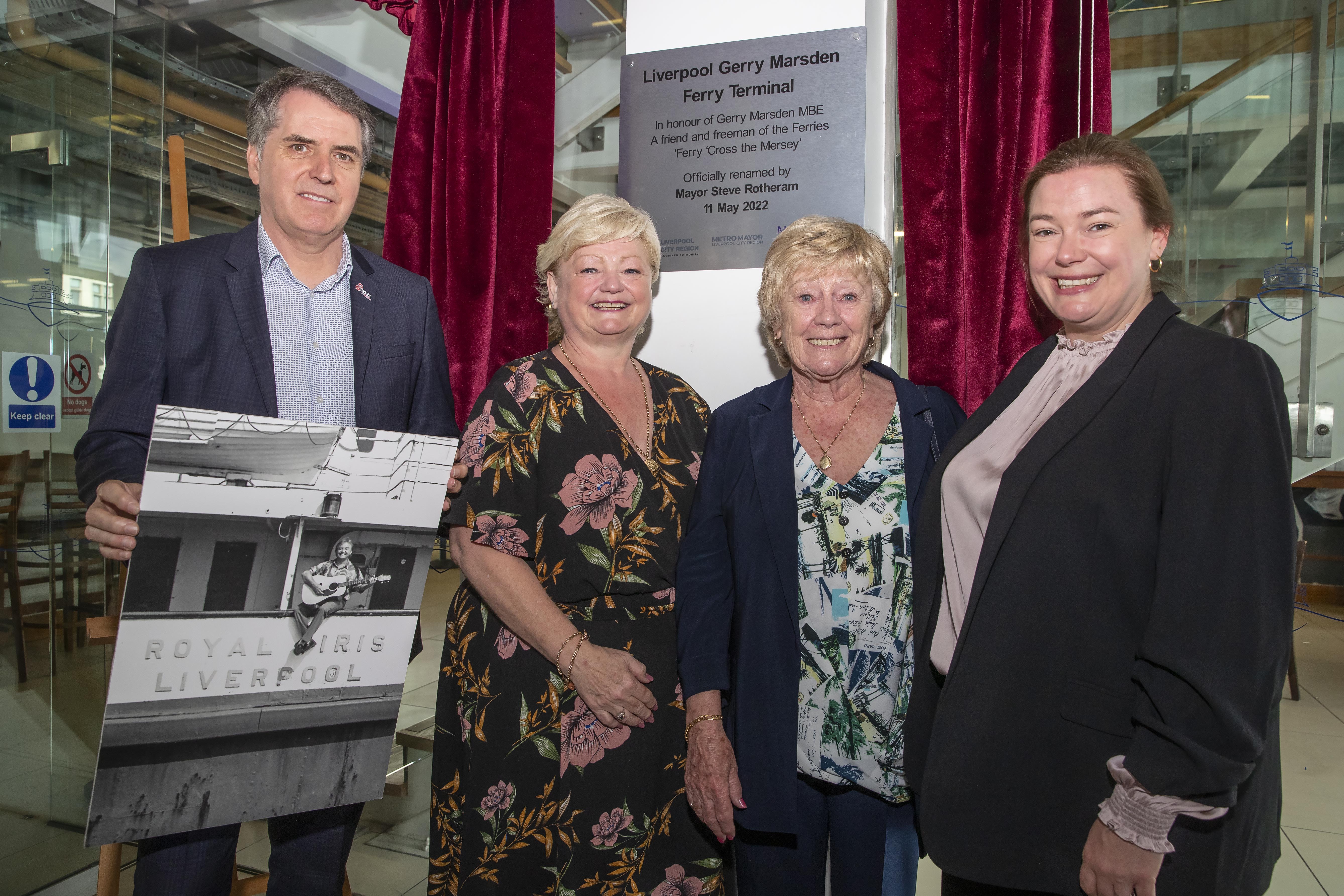 Mersey Ferries passengers will now arrive at the ‘The Liverpool Gerry Marsden Ferry Terminal’, after the Pier Head building was today renamed in honour of the Merseybeat icon.

Mayor of the Liverpool City Region Steve Rotheram and members of Gerry’s family were on hand to mark the official renaming, as a new mural was unveiled within the terminal building after a performance by the Liverpool Welsh Choral choir.

Gerry, who sadly passed away in January 2021, will forever be associated with the ferries for his song ‘Ferry Cross The Mersey’, the world famous anthem recorded with his group Gerry and the Pacemakers in 1964. The song is still heard by visitors and local people alike every day when it is played on the Mersey Ferries' River Explorer Cruise.

“Gerry was an iconic figure whose music helped establish our region on a global scale. He was a proud champion of the Liverpool City Region, and we are forever grateful to him the legacy he leaves. His words have made our ferries world famous and immortalised them in the minds of so many.

“I was lucky enough to call Gerry a friend and I can think of no better way to honour his life and legacy than with The Liverpool Gerry Marsden Ferry Terminal – ensuring that everyone who visits Liverpool will be reminded of the joy his music brought to so many.”

“We are extremely proud and honoured at this wonderful tribute to Dad. Along with his music, this will be a lasting legacy.

“Dad loved this city and its people, and he would be so proud having the ferry terminal renamed in his honour, as his song ‘Ferry Cross the Mersey’ states “cos this land’s the place I love, and here I’ll stay”.

“Thank you to Mayor Steve Rotheram, Mersey Ferries, and the people of Merseyside for this wonderful accolade."

Gerry's daughter, speaking on behalf of the family

Mayor Rotheram announced plans to rename the terminal last year after discussions with Gerry’s family. A public consultation received over 1,000 responses, with over two thirds in favour of the change.

After being formally approved earlier this year, the terminal will now be forever linked to Gerry, recognising his huge contribution to the history and the international profile of the Mersey Ferries.

This is the second honour that Gerry has received from the Ferries – he was given an honorary Freedom of the Ferries award in 1985 in recognition of this special connection.

The new 12ft high mural has been designed and created by local sculptor and artist Rick Myers.

Smaller versions of the mural will be made available for people to buy to raise funds for Wirral Holistic Care Services. Gerry was the lead patron of the charity and his daughter Yvette is one of their trustees.