End of an era – but big things on the horizon: Spaceport to close as plans for Eureka! Mersey take shape 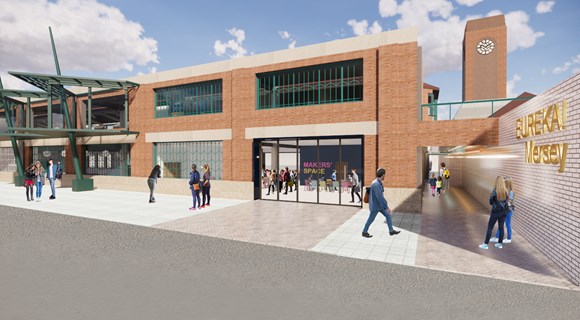 It’s the end of an era as Spaceport closes its doors for the last time on 31 December making way for the new and exciting  chapter with Eureka! Mersey.

The attraction, which is based at Mersey Ferries’ Seacombe terminal, has welcomed hundreds of thousands of visitors since it opened in 2005.

Alongside its permanent galleries on the theme of space exploration, and interactive exhibits including a planetarium and rocket simulator, Spaceport also hosted popular exhibitions on hit shows including Doctor Who and Wallace and Gromit.

Spaceport hosted its share of stars over the years, including actors Star Wars actors Peter Mayhew and Warwick Davis, who played Chewbacca and Wicket the Ewok respectively in the original film trilogy. The attraction was even visited by Queen guitarist and astrophysicist Brian May when he was named as Chancellor of Liverpool John Moores University in 2011.

But now the iconic terminal building which housed Spaceport has a bright new future awaiting it as the home of Eureka! Mersey – an exciting new science and discovery centre for young people and families.

Announced in July, Euerka! Mersey will be the second attraction run by the award-winning team at Eureka! in Halifax, West Yorkshire. In July the attraction was awarded £6.6m from the Liverpool City Region Combined Authority’s Strategic Investment Fund and received approval from Wirral Council in October.

Co-created with nearby schools and the local community, it is expected that Eureka! Mersey will create new jobs and opportunities in Wirral – both in construction and once the attraction opens in 2022.

“It’s time to say a fond farewell to Spaceport which has been entertaining families and educating young people for more than 14 years.

Our city region is already home to some of the best museums in the country and Eureka! Mersey is sure to be a fantastic addition. That’s why the Combined Authority has committed £6m in funding, to help Eureka! Mersey to create an attraction which will not only be fun, but also help young people to develop an interest in science, technology and art.”

“All across the country Science and Discovery Centres are engaging with children and young people to share and explore the relevance of science to their lives and their futures. In the Liverpool City Region Spaceport has been an important part of this for many years and its legacy will live on through the memories and future choices of its visitors. Eureka! is very proud to be taking up this mantle with the planned opening in 2022 of Eureka! Mersey.

Using our own unique approach of play- and discovery-based learning, and building on our 28-year track record of success in Halifax, we will be bringing a brand new experience to the Northwest. We look forward to becoming an integral part of the Liverpool City Region community and adding value to its vibrant visitor economy.”

“Spaceport has entertained and educated young people for well over a decade, and I’m delighted that, once completed, Eureka! Mersey will continue to fulfil this important role. The building of this new attraction in the Liverpool City Region is very exciting and represents a fantastic new addition to our world-class visitor offer.”

Portfolio Holder for Culture, Tourism and the Visitor Economy