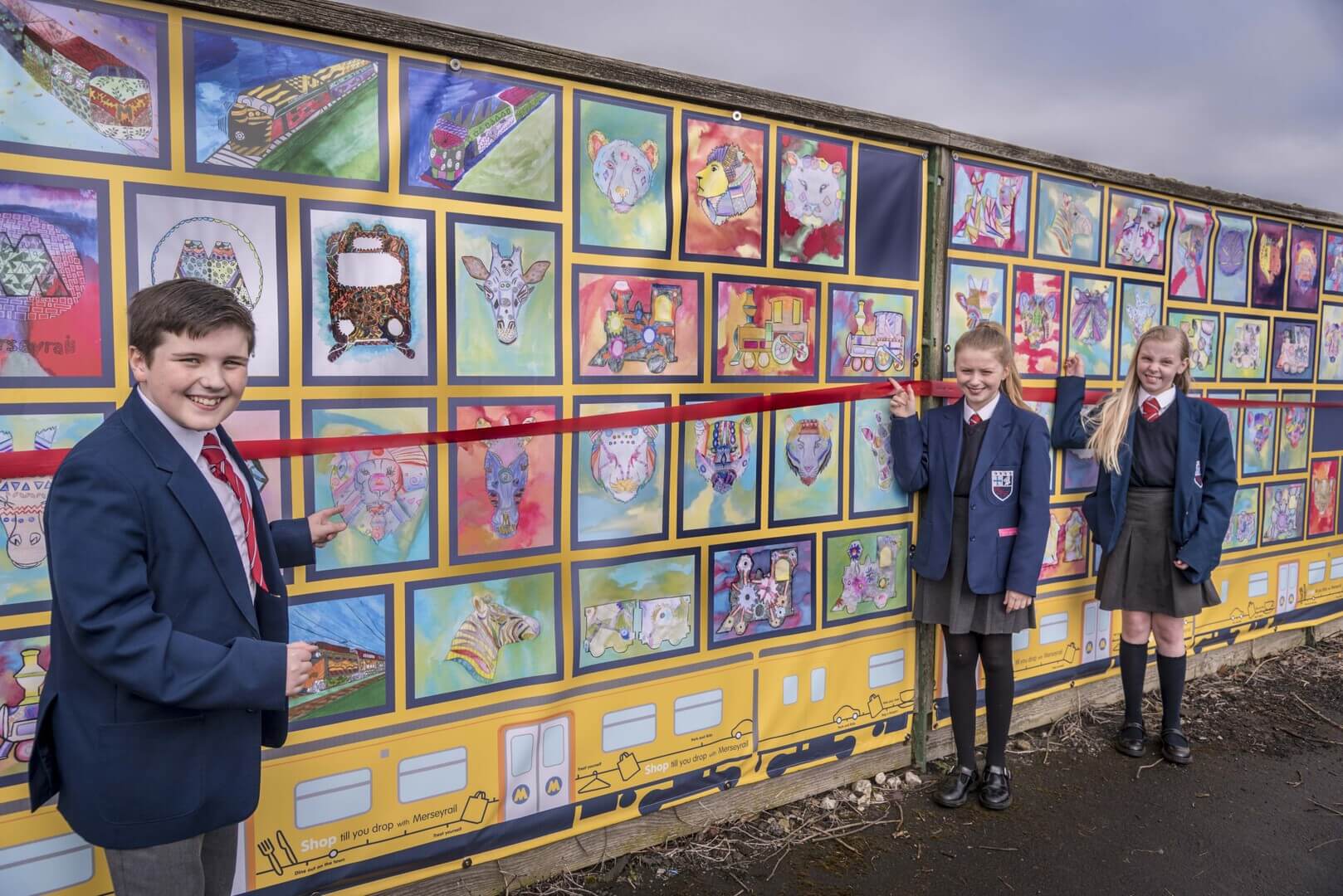 Residents of Maghull will benefit from better links to the local rail network from June 2018 after the opening date for the new station in the town was confirmed.

The first services, operated by Merseyrail, will run from the new Maghull North station from the morning of Monday 18th June.

The opening date was confirmed as the first of several community projects involving local groups and schools was unveiled at the station site – artwork designed by local school children.

A number of schools in the Maghull area have come together to produce community artwork to help brighten up the station site. Seven schools, both primary and secondary, from the Maghull area took part in the project, which was unveiled along the site hoardings on School Lane last Friday (16th March).

Students from Maghull High, Deyes High School, St Andrew’s Primary, St Georges Primary, St Gregory’s, St Thomas Primary and Summerhill Primary schools showed off their artistic talents for the project, covering a wide range of subjects from butterflies and trains to the Three Graces and other landmarks within the Liverpool City Region.

After the unveiling Rob Grey from Network Rail gave the students a presentation about the work involved in building a new station, the jobs and skills that are needed to work in the rail industry and railway safety. This was followed by a question and answer session.

A number of other community projects are planned for the new station, including a time capsule prepared by a local school and display boards covering the history of the former nearby pioneering Moss Side Hospital.

“The new Maghull North station will be of huge benefit to local residents when it opens in June, giving more travel options while playing a big part in helping the on-going development of the area in the coming years.

“This fantastic art project involving local schools is a great example of the community getting involved and will help to bring a bit of colour to the new station site.

“There are a number of other community-based projects planned for the station and we would encourage local residents to get involved and give their support in the coming months.”

"We are really looking forward to welcoming Maghull North station on to the Merseyrail network. These investments, including the new fleet project, are really enhancing rail services for local people.

“Maghull North will make our rail network much more accessible for those living nearby and it's great to see the station already becoming part of the community with the artwork that has been created by local schools.”

“The new Maghull North station forms part of a massive £340m railway investment in the Liverpool City Region. This major investment is about boosting connectivity and capacity – making room for new, longer trains, with more space for passengers.

“It has been fantastic working with local schools to create the new artwork which will be enjoyed by Maghull North station passengers for decades to come. We look forward to future projects with the local community before the station officially opens in June this year.”

“We approached the schools and asked the children what they would like to see at the new station.

“We gave them a blank canvas to produce what they wanted for the project and were delighted with the quality and quantity of work that came back.”

“It was an absolute pleasure to attend the event and meet all of the children who have helped brighten up what is currently a construction site.

“I would encourage mums, dads, grandparents, brothers, sisters and the wider community to come along and have a look at the display on School Lane”

The new Maghull North station will be located just off School Lane next to the former Ashworth Hospital site, between the existing Maghull and Town Green stations on the Ormskirk branch of Merseyrail's Northern Line.

The £13m scheme is being funded through the Government's Local Growth Fund (LGF), Merseytravel and the Homes and Communities Association, which previously owned the land on which the station will be built. Network Rail is building the station, which will be operated by Merseyrail.