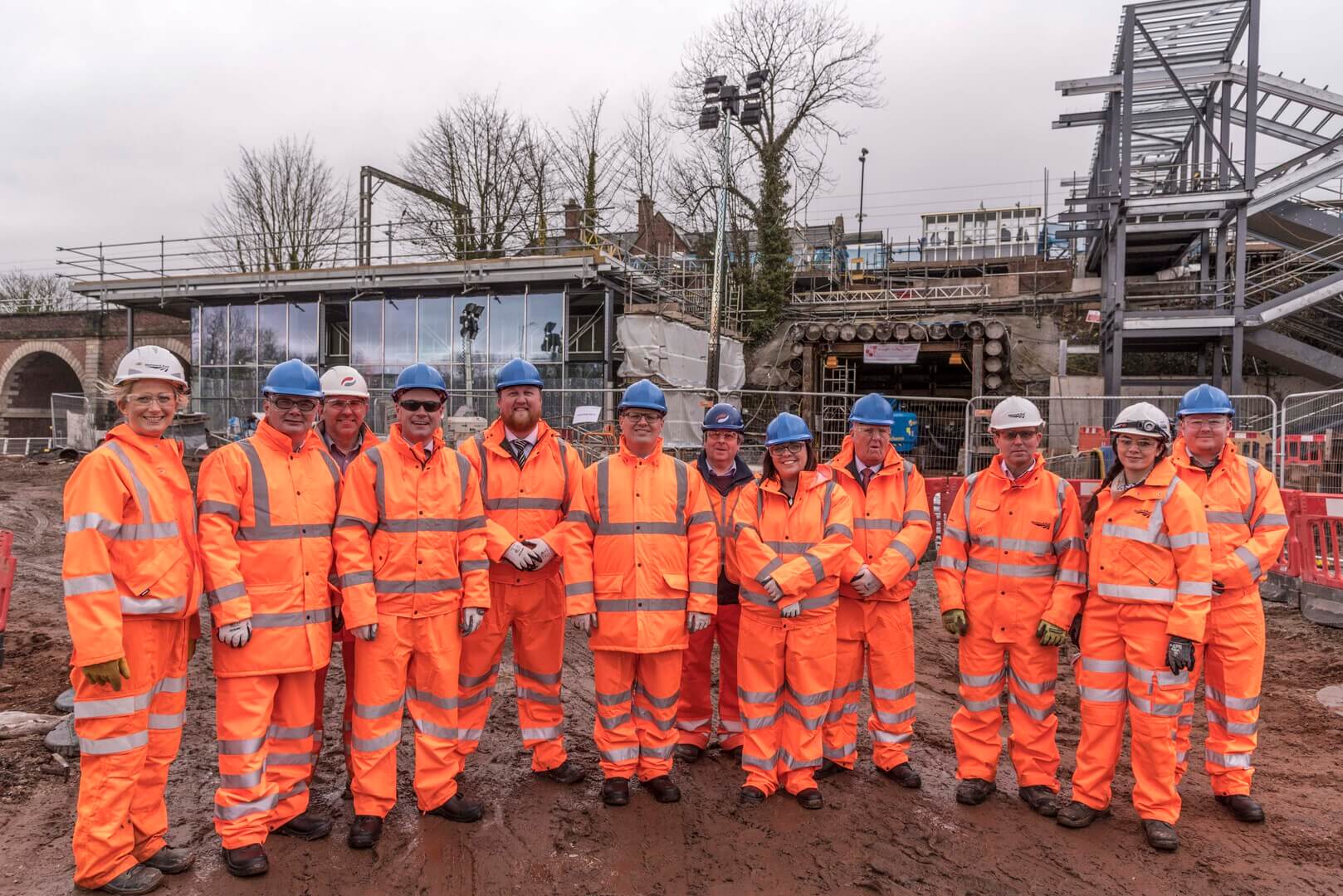 The Newton-le-Willows Interchange scheme, which will see rail passengers benefit from improved station facilities and a new park-and-ride offering, passed another key milestone recently as work began on excavating the new subway to connect the platforms.

Representatives from the key partners involved and local councillors visited site last Friday (16 March) to see the progress made so far.

On behalf of Merseytravel, Network Rail, along with contractor Galliford Try, is leading on the delivery of the rail element of the scheme. Merseytravel is working directly with contractor North Midland Construction on the car park and bus interchange elements, the first phase of which was completed in November 2016.

The scheme will see a new main station entrance and ticket office established on the south side of the tracks on Alfred Street and other improvements, including:

Due to a number of challenges faced in the construction of the new subway, uniquely taking place under an operational passenger railway line, it is now anticipated that the new facilities will be open to the public in summer 2018.

A bespoke horizontal piling system has been used to tunnel the new subway to ensure the current Newton-le-Willows station, and associated rail lines, could remain open throughout the work. This has been incredibly challenging engineering project to tunnel through a railway embankment which was first built in 1830.

If a common tunnelling method was used, the rail line would need to be closed for an extended period which has been avoided to keep passengers moving throughout this vital upgrade.

“I’m pleased to see that there’s been a lot of progress made since work began on this project early last year.

“Once completed, these improvements to Newton-le-Willows station will mark a significant investment in our region and will bring huge improvements in connectivity to Liverpool, Manchester and beyond.

“It’s great to see the significant progress that has been made on the Newton-le-Willows Interchange scheme despite the challenges that have been faced by the project team.

“The new station and park and ride facilities will establish a transport hub which will link local transport through bus and rail with strategic rail links across the country, and is a prime example of our Long Term Rail Strategy being put into practice.

“We look forward to seeing the new facilities open later this year and seeing the benefits they will bring to the local area.”

“We have used a unique horizontal piling system to tunnel the new subway which has allowed us to keep the rail lines and current Newton le Willows station open.

"Our priority has been to keep passengers moving throughout our work, but this has also meant it is taking a little longer than expected.

“Our normal method would have meant disrupting passenger journeys over an extended period which we wanted to avoid. This is a key part of over £340m railway investment in the Liverpool City Region and will be open in summer this year”.

Network Rail Sponsor for the scheme

“The new facilities for our customers go hand-in-hand with our own modernisation programme which will see 98 brand new trains and more than 200 fully refurbished trains on the network by 2020.”

The overall scheme is costing £18.95m and is funded by the Local Growth Fund and Merseytravel. It is a key project in Merseytravel’s Long Term Rail Strategy and the Growth Deal for the Liverpool City Region Combined Authority, as well as the St Helens Local Development Framework. It forms part of the wider £340m investment by the Liverpool City Region and Network Rail in rail improvements until 2019.

The improvements to the station, currently managed by train operator Northern, aim to help create a strategic transport hub, linking up to the local transport network with strategic rail links across the country, building on the electrification works that have already taken place on the Liverpool-to-Manchester line and the new services that will soon be calling at the station. It will also help support the future development of the nearby former Parkside Colliery site.