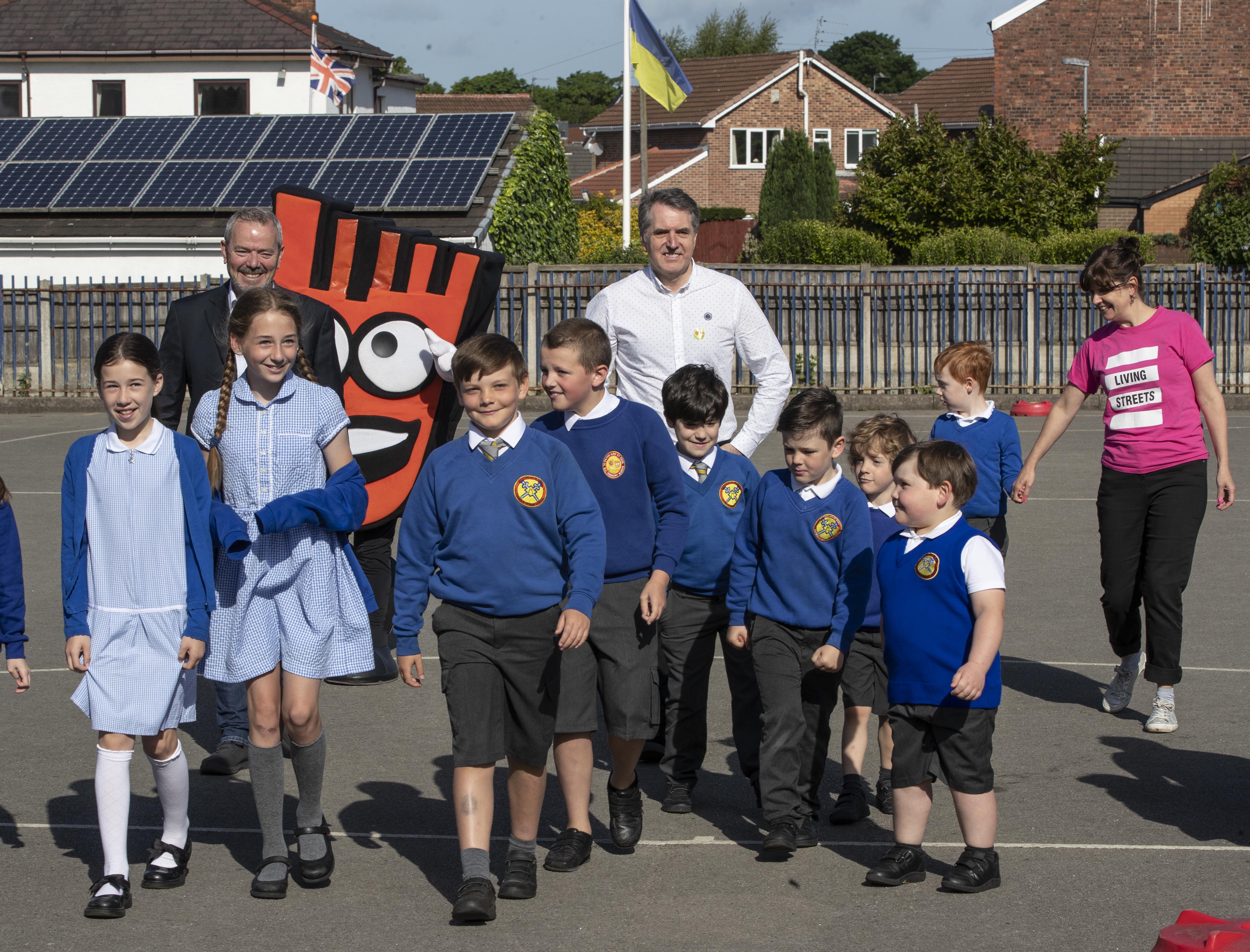 Liverpool City Region Mayor Steve Rotheram met with pupils and parents at the St Peter and St Paul’s Catholic Primary School in St Helens to talk about the benefits of a more active school run.

The school is one of many across the Liverpool City Region celebrating Walk to School Week, a five-day national event organised by Living Streets, the UK charity for everyday walking.

From 16-20 May, families are being encouraged to walk, wheel, cycle and scoot for the whole week to help improve young people’s health and wellbeing as well as reducing congestion and harmful pollution around schools.

A generation ago, 70% of primary school aged children walked to school, now it’s less than half. Living Streets is working with schools to reverse the decline in walking rates. Schools that take part in Walk to School Week typically see an increase in walking rates by 23 per cent with a 30 per cent reduction in cars driving to the school gates.

64% per cent of pupils at St Peter and St Paul's Primary School are now walking, wheeling, cycling or scooting to school.

Encouraging more people to take short trips, such as those to and from school, by foot or on bike is an important part of plans to make the Liverpool City Region net zero carbon by 2040.

To make these active journeys easier and safer, Mayor Rotheram has committed tens of millions of pounds to expand and improve the region’s walking and cycling routes and better connect them to the rest of the wider public transport system.

Walk to School Week comes just a few days before the opening of the Liverpool City Region’s first Active Travel Summit on 24 May, which will bring together advocates, activists and policymakers to discuss the future of walking and cycling in the region.

“It’s fantastic to see that so many schools across the city region are getting behind Walk to School Week and promoting healthier, greener ways for our young people to travel.

“The more we can encourage families to make small changes to their morning routine – like ditching the car to walk to school – the better it will be not only for their health and wellbeing, but for the health of our planet too.

“I’m committed to making sure that we pass on a cleaner, greener, healthier Liverpool City Region to the next generation. People of all ages have a part to play in helping us to achieve that. It’s why we’ve invested millions into delivering new walking and cycling routes, as well as making existing ones safer and more accessible – to give people a genuine alternative to the car that makes getting from A to B easier than ever before. Hopefully it might even convince some people to ditch their car for good – just like I have!”

“Congestion and air pollution around our schools are at dangerous and sometimes illegal levels – walking to school is something families can do which will really help to tackle this problem.

“More than that though, an active school run can help with young people’s physical and mental health and it can help them feel more confident and independent – what’s not to love?”

The theme of this year’s Walk to School Week, #PowerUp, will encourage pupils through video game-inspired design, encouraging them to travel sustainably to school every day of the week.

Last year, a record number of over 350,000 pupils across the country took part in Walk to School Week, with this year looking to be even bigger.

“We’re thrilled Mayor Rotheram and our city region Cycling and Walking Commissioner can join us to celebrate Walk to School Week and hear about the fantastic work being done by the school to get more active on the school run.

“Walking to school offers so many benefits, from fewer cars at the school gates to happier and more active children. I hope the visit today will inspire the pupils to keep putting one foot in front of the other.”