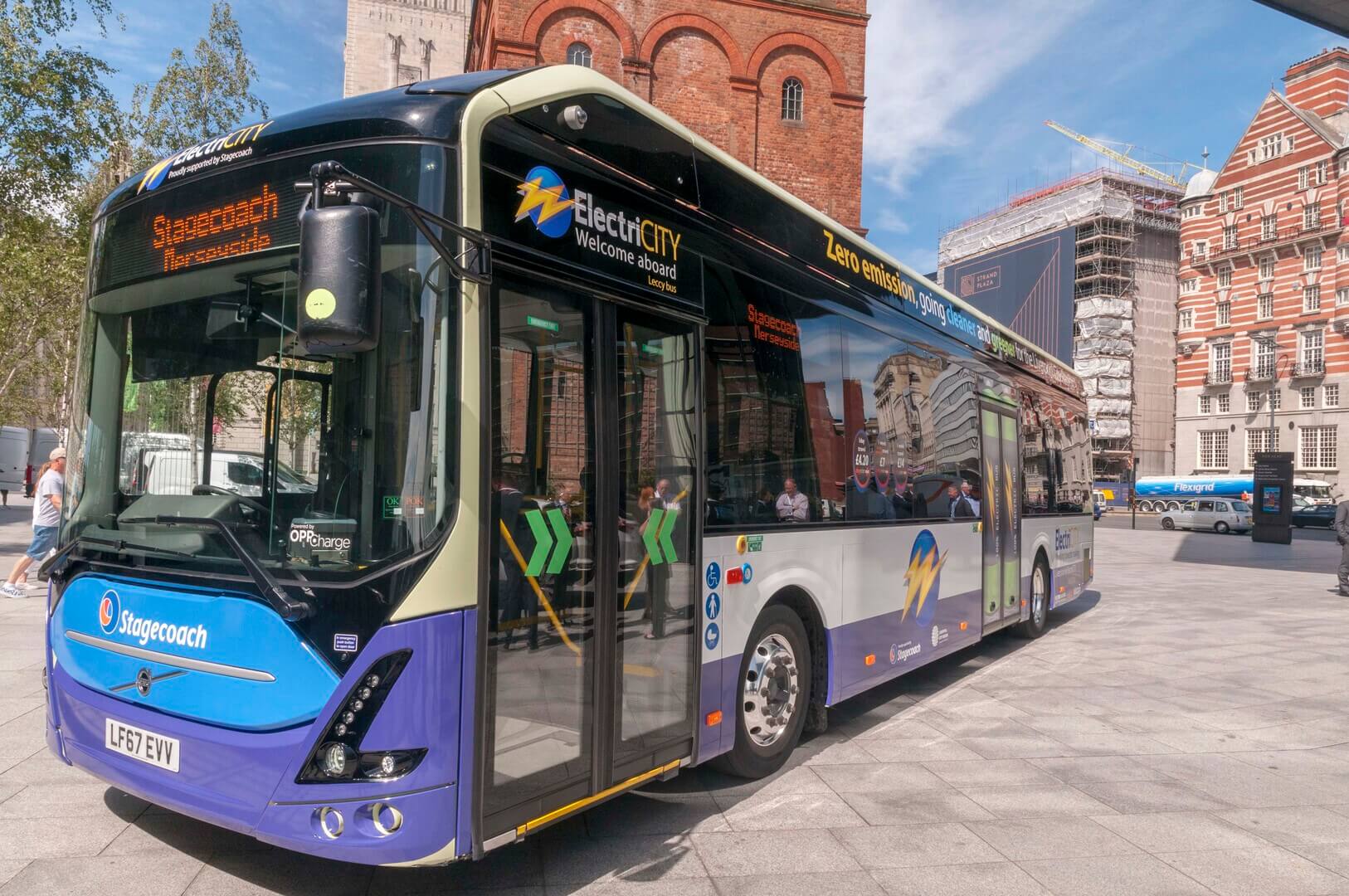 Merseytravel and bus operator Stagecoach are partnering to launch a two month trial of a new fully electric, zero emission bus which can be charged on route, cutting waste and increasing flexibility of service.

Engineered by Volvo, the 7900e single deck bus will operate for a period of eight weeks on 82 and 86 routes via Garston and Liverpool John Lennon Airport. It will be immediately recognisable by its specially 'electriCITY' branded livery.

The vehicle will be powered via an innovative OppCharge inverted pantograph installed at the Liverpool One interchange. Built by ABB Ltd this technology is used widely across Europe, and will charge the bus in between three and six minutes. This means that buses do not have to return to depot to charge, reducing wasted miles and potentially allowing 24-hour continuous service.

The bus has been trialled at several other key locations across the UK – including Manchester, Cardiff and Heathrow Airport – before coming to Liverpool. Volvo selected the city as the final area to be part of the scheme, citing the ongoing development of the Liverpool City Region, its important place within the Northern Powerhouse and future links to HS2.

Zero emission vehicles like the Volvo 7900e will be crucial in helping realise the Liverpool City Region's aim of becoming a zero carbon city region by 2040.

"Low and zero emission public transport has a key role to play in helping us achieve a cleaner and greener City Region.

"That's why so far, working closely with bus operators, we've brought in buses which run on electricity, biogas or a mix of the two and re-engineered older vehicles in the fleet to reduce their emissions. 70% of our buses are low emission - In fact, many of them now give off less pollution than a standard diesel car.

"Whilst this is only a short-term trial, we hope that it's a great success. The kind of technology powering this bus will no doubt help improve air quality in the future, which will benefit the health and wellbeing of everyone in the City Region."

"I'm delighted that Volvo has chosen Liverpool as one of the key areas to trial this technology in the UK. One of our top priorities through the Bus Alliance is to get more people on the bus and reduce car miles and carbon footprints.

"To do this, it's essential that we continue to improve the offer and benefit to customers travelling by bus.

"That's why we're committed to investing in innovative transport technology which will not only make bus services environmentally friendly, but also efficient and flexible."

"This trial is an exciting opportunity for us and marks a step forward for greener travel in the Liverpool City Region. Stagecoach is committed to improving air quality across the country and making bus travel the safest and cleanest travel option.

"We continue to look for new ways in providing our customers with the best value for money service on Merseyside."

"Liverpool marks the fifth and final stop for the fully electric Volvo 7900e trials which have taken place over the past year. It's been exciting watching the vehicle continue on its journey of demonstrations across the UK following the initial launch in Manchester last September.

"As well as the UK trials, the 7900e which is part of the Volvo Electromobility range, has been making great strides throughout Europe with successful operations underway in Sweden, Belgium, Germany and Luxembourg.

"This is the first time that all the stakeholders have come together to deliver a project which has overall been extremely successful.

"Increasingly the technology of vehicles is changing the face passenger transport which offers a choice to customers and a variety of options for operators.

"The first permanent installation using OppCharge technology in the UK is set to go live in Harrogate in the next month or so, which will mark the next phase in the development and operation of the 7900e."

"We are delighted to be able to offer residents and visitors to Merseyside access to this technology and hope this tour will successfully demonstrate the huge improvement which electric buses can make on the environmental impact of public transport, with this bus delivering up to 80% lower energy consumption than its regular diesel equivalent."