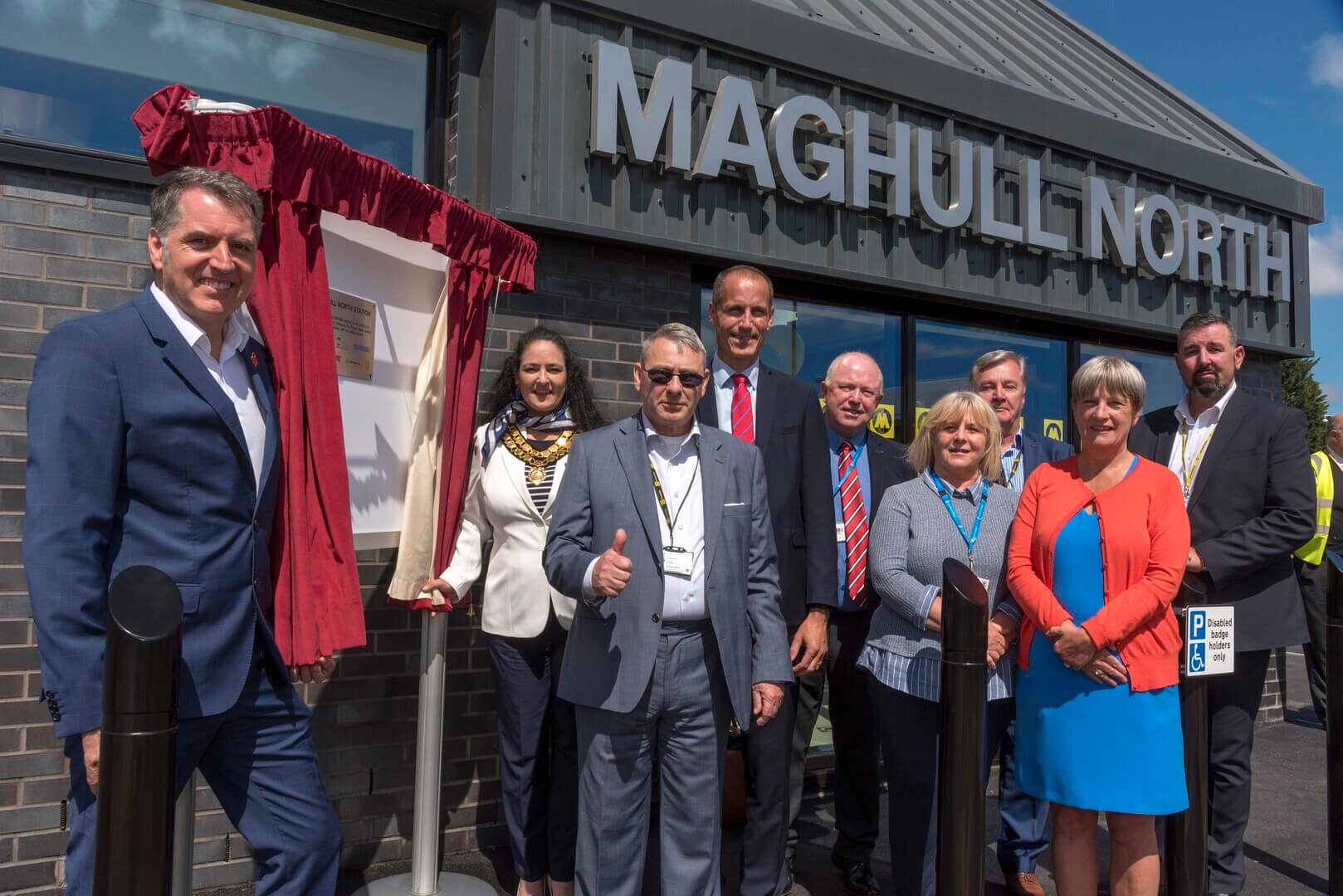 At an official ceremony this morning (Friday 22nd June), the Metro Mayor unveiled a commemorative plaque alongside Sefton Central MP Bill Esterson and other representatives from the key partners involved in developing the scheme.

“This new station demonstrates the strategic approach we are taking to ensure that our policies work in harmony across areas including transport, housing, economic development and skills.

“This £13m investment in Maghull North is a great example, as the new station anticipates the needs of the hundreds of people who will live in new homes planned for the area in the near future.”

The new station is located just off School Lane next to the former Ashworth Hospital site, between the existing Maghull and Town Green stations on the Ormskirk branch of Merseyrail's Northern Line. Operated by Merseyrail, it is the 68th station on their network.

Work began on the scheme in September 2017, with Network Rail and contractor Buckingham Group constructing the station on behalf of Merseytravel. The first service departed at 5:58am on Monday 18th June.

Facilities at the new station include:-

The £13m scheme is being funded through the Government's Local Growth Fund (LGF), Merseytravel and a contribution from the Homes and Communities Association, which previously owned the land on which the station will be built.

It forms part of the wider £340m investment of rail improvements across the Liverpool City Region over the next three years, and sits within the wider Great North Rail Project to transform train travel across the North.

“It is excellent news for residents in Maghull and Lydiate that the station has opened and I am sure it will bring great benefits to the people living here.

“It will also be very important as hundreds of new homes are planned nearby. The additional car parking will help and the extra station will take some pressure of the existing station in Maghull.

"This is a vital part of infrastructure development that will boost economic growth and is good news passengers.”

“We are committed to boosting economic growth across the whole of the UK and building a country that works for everyone.

"Government has invested a total of £3.4bn in the Northern Powerhouse through a series of Growth Deals. A total of £10.71m was invested in the Maghull North Railway Station alone.

"Such investment means better connectivity across the region and less congestion on Liverpool’s local roads.

"The development is an example of Liverpool City Region’s Long Term Rail Strategy – a 30 year vision to improve connections with the City Region and beyond”.

"We're investing in the most significant improvement of the rail network since its creation in Victorian times, which includes the £1 billion Great North Rail Project.

"This is the first new station to open in Merseyside for 20 years and will ensure local people are better connected, with 370 new homes being built in the area.

"The Great North Rail Project will see faster and more frequent services on modern, greener and quieter trains including more than 500 new carriages, room for 40,000 extra passengers and more than 2,000 extra services a week from 2020."

"There’s been a desire locally for a station to be built on this site for a long time and we’re delighted to now see it open and already proving very popular with the local community.

"This station is a prime example of our Long Term Rail Strategy being put into practice, which will continue to develop further with the completion of other schemes including the improved Newton-le-Willows Interchange and the Lime Street upgrade over the next few months."

"Maghull North is a welcome new addition to the Merseyrail network, providing improved access to local rail services for the residents of Maghull.

"I am really pleased to see the station officially open today, following a successful week in operation since the first train arrived on Monday."

“The brand-new Maghull North station is the latest milestone in the Great North Rail Project, a rail industry team effort to transform train travel for customers across the North by 2020 through track and train upgrades.

“Improved rail links like this are creating new opportunities for people across the North by improving speed, reliability and frequency of rail access to major economic centres like Liverpool.”

"Since the first trains started stopping at Maghull North earlier this week, it has marked a new beginning for the area.

"The new station acts a key piece of infrastructure in our Local Plan giving our towns and valued communities sufficient support to grow. It also connects the local area through the development of a local transport hub with facilities for buses, cycling and park & ride.

"Not only will the new station boost the local economy but it will further improve public transport capacity and connectivity across Sefton and the City Region."