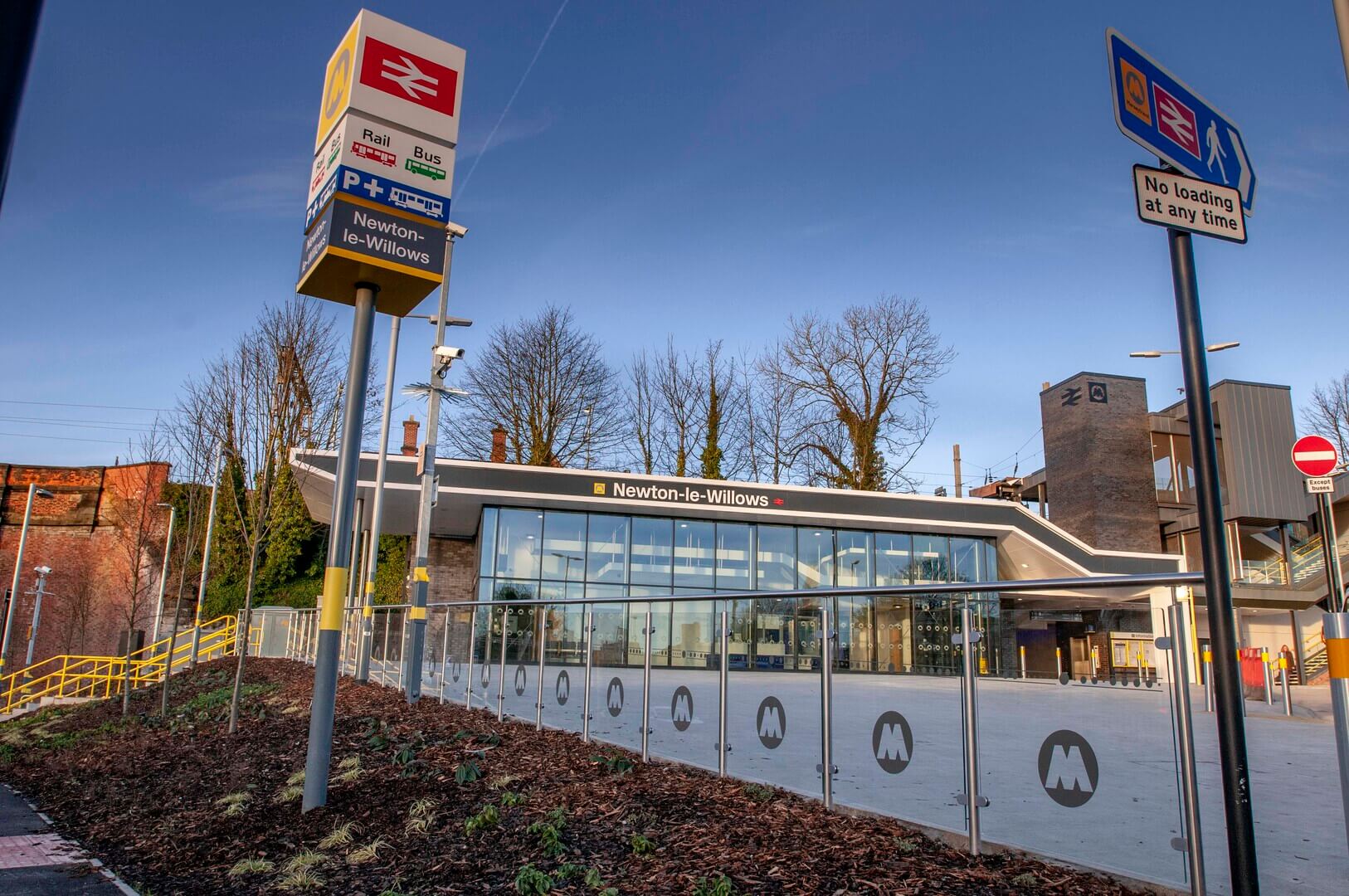 Rail users are now benefiting from new and improved facilities as the Newton-le-Willows Interchange scheme reached completion this weekend.

The rail elements of the scheme, delivered by Network Rail on behalf of Merseytravel, including the new subway, stairs, lifts, ticket office and waiting facilities were opened to the public on Sunday 13th January. Also opening at the same time were the expanded 400-space car park and new bus interchange.

The revamped station forms part of the birthplace of modern railway, the Liverpool and Manchester Railway line, which opened in 1830.

Funded by the Local Growth Fund and Merseytravel, the £18.95m scheme has seen a new main station entrance and ticket office established on the south side of the tracks on Alfred Street and other improvements, including:

The scheme is a key project in Merseytravel’s Long Term Rail Strategy and the Growth Deal for the Liverpool City Region Combined Authority, as well as the St Helens Local Development Framework.

It forms part of the Great North Rail Project, including the wider £340m investment by the Liverpool City Region and Network Rail in rail improvements until 2019.

"I am delighted that the new facilities at the Newton-le-Willows Interchange have now been completed.

"Through schemes like this, we are directly investing in our public transport system to deliver an improved service across the city region, enabling better access to a host of opportunities for work, education and leisure."

“The opening of the new and improved facilities at Newton-le-Willows is great news for local rail users and we thank them for the patience they have shown while the work has been taking place.

“The project team have faced a number of challenges in the construction of the new facilities but they have managed to deliver the scheme while keeping the station open and services running on the busy Manchester to Liverpool line.

“The new station and park and ride facilities are a significant investment by the Liverpool City Region. They will establish a transport hub which will link local transport through bus and rail with strategic rail links across the country, and is a prime example of our Long Term Rail Strategy being put into practice.”

“This government is committed to boosting economic growth across the whole of the Northern Powerhouse and building an economy which is fit for our shared future.

“The Liverpool to Manchester Railway was the birthplace of modern train travel when it opened in 1830 and this investment of over £14m from the Local Growth Fund to transform Newton-le-Willows station will ensure it is at the forefront of connecting the people and businesses of these great cities of the Northern Powerhouse for many years to come.”

Minister for the Northern Powerhouse and Local Growth

“This much-needed investment is part of the Great North Rail Project, a rail industry team effort to transform train travel for customers across the North.

“This has been an incredibly complex and challenging project. Our priority has been to keep the railway open throughout the station’s major upgrade and I’m please to say we achieved that. I’d like to say a big thank you to passengers for their patience while we delivered these essential upgrades.”

“It’s fantastic to see these new facilities for our customers in Newton-le-Willows, which go hand-in-hand with our own improvements across the Northern network.

“I know the work has taken a while – and I’d like to thank our customers for their patience and understanding – but there can be little doubt that it has been well worth the wait.

“The station and surrounding area has been completely transformed and I can’t wait to welcome our customers.”

“I’m pleased to see that the improvements at Newton-le-Willows rail station have now been rolled out to the public.

“After close partnership working and investment by St Helens Council, the City Region and Merseytravel, residents and commuters will see Newton-le-Willows have a modern, accessible station with improved connectivity, making the most of its strategic location on the rail and road network.”

"We're very proud of the finished station and the improved experience that it will provide for rail users. We'd like to thank them for their patience during construction.

“The historical significance of the station and the challenge of building the new subway has made this project particularly interesting."

The improvements to the station, currently managed by train operator Northern, aim to help create a strategic transport hub, linking up to the local transport network with strategic rail links across the country.

This builds on the electrification works completed on the Liverpool-to-Manchester line in 2015 and the new services that are calling at the station. It will also help support the future development of the nearby former Parkside Colliery site.