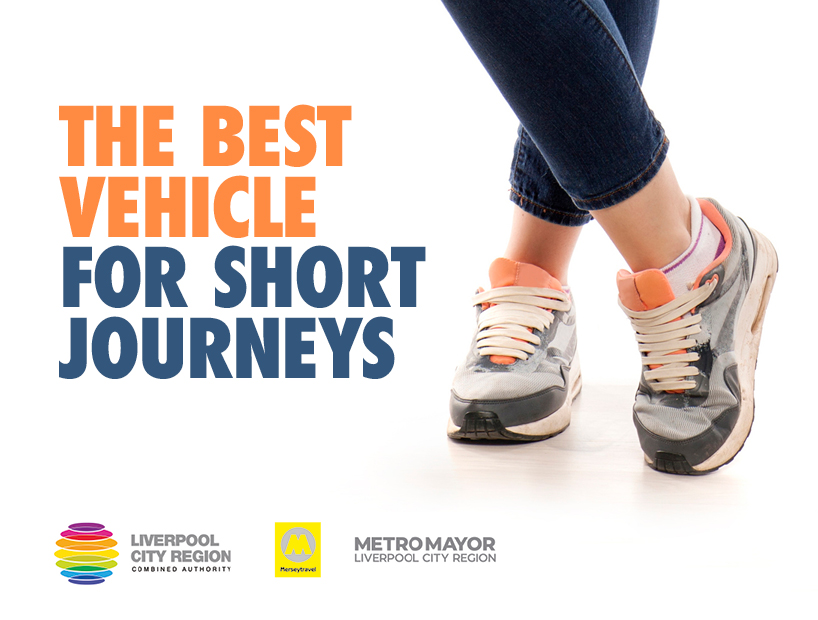 Motorists in the Liverpool City Region are being urged to ditch the car for short journeys - for their health, their wallet and the planet.

A new campaign from the Liverpool City Region Combined Authority aims to get people walking and cycling by encouraging them to think of themselves as the 'best vehicle for short journeys’.

The campaign will focus on how everyone can get about without jumping into a car by using people power – whether that’s by cycling, walking, jogging, pushing a buggy or using a handbike.

It will run through the spring and summer as part of a long-term push to keep more people travelling actively as lockdown eases and beyond.

But the message behind the campaign is stark.

While the city region's domestic and business carbon dioxide emissions are steadily falling, transport emissions have risen since 2013 - and most of that's down to the increased use of cars.

And research shows car usage has already risen to near pre-pandemic levels. Currently only 2% of all journeys in the city region are taken by bike and 30% by walking.

Data also shows nearly two thirds of journeys are short - less than 5km – and of those around half are taken by car despite the trips often being within comfortable walking or cycling distance for most people.

That’s contributed to a steady annual rise in the number of miles travelled in motor vehicles on the city region's roads.

Tackling the over-reliance on cars is seen as crucial to achieving the city region's goal of being zero-carbon by 2040 as the world grapples with a Climate Emergency.

That's why millions of pounds is being invested in new cycling and walking routes across Liverpool City Region to help people travel actively with confidence and to enjoy these three key benefits:

Cycling and walking for daily exercise and essential journeys has surged in popularity during the Covid-19 pandemic. Around 6 in 10 of people told a Combined Authority survey they wanted to continue walking and cycling once restrictions end.

“In the past year, I know that lots of us have taken the chance to exercise more and even get out on our bikes. It would be fantastic if we were all able to keep that up after the pandemic has passed and as Mayor, I am investing so that we can.

“We have already started work on a 600km network of new and improved walking and cycling routes across the region. When complete, it’ll give everybody somewhere safe and secure to get out and about.

“Most journeys people take are only short, but too many are taken by car. When we move out of lockdown, let’s look after ourselves and the environment a bit more by taking more journeys on foot or by bike!”

“If you are lonely, bored or just don’t know where to start, get your hands on a bike and your world will broaden so much. I hadn’t been cycling properly in years but picked it up again so easily.

“It’s a brilliant way to get about without having to jump in the car. You will make fantastic friends, discover hidden beauty spots on your doorstep, have the benefit of fresh air and exercise thrown in.

“New bikes lanes are making cycling much more user friendly and – when we’re able to meet up again – there are so many local cycling groups to join. It really can change your life.”

“Air quality, mental and physical wellbeing, safety for our most vulnerable, Climate Change. The reasons for getting more active and reducing road traffic are clear and of benefit to all.

“However, I believe the biggest reason for walking and, in particular, cycling around our region is because it’s brilliant. I swapped my car for my bike thirty years ago and I have never had to diet. I commute through beautiful parks and quiet ways arriving relaxed and invigorated. I am also wealthier. I save enough for an extra holiday a year. Like I say - brilliant.

“Get out there, go on an adventure where you live, to the shops, to school or to work. Find a different more relaxed way to get around as we work hard to make those journeys more convenient and safer by building a better network and improving our urban environment to support the changes we need to make.”