Two short journeys a week by bike or on foot could slash carbon emissions in Liverpool City Region by 130,000 tons a year 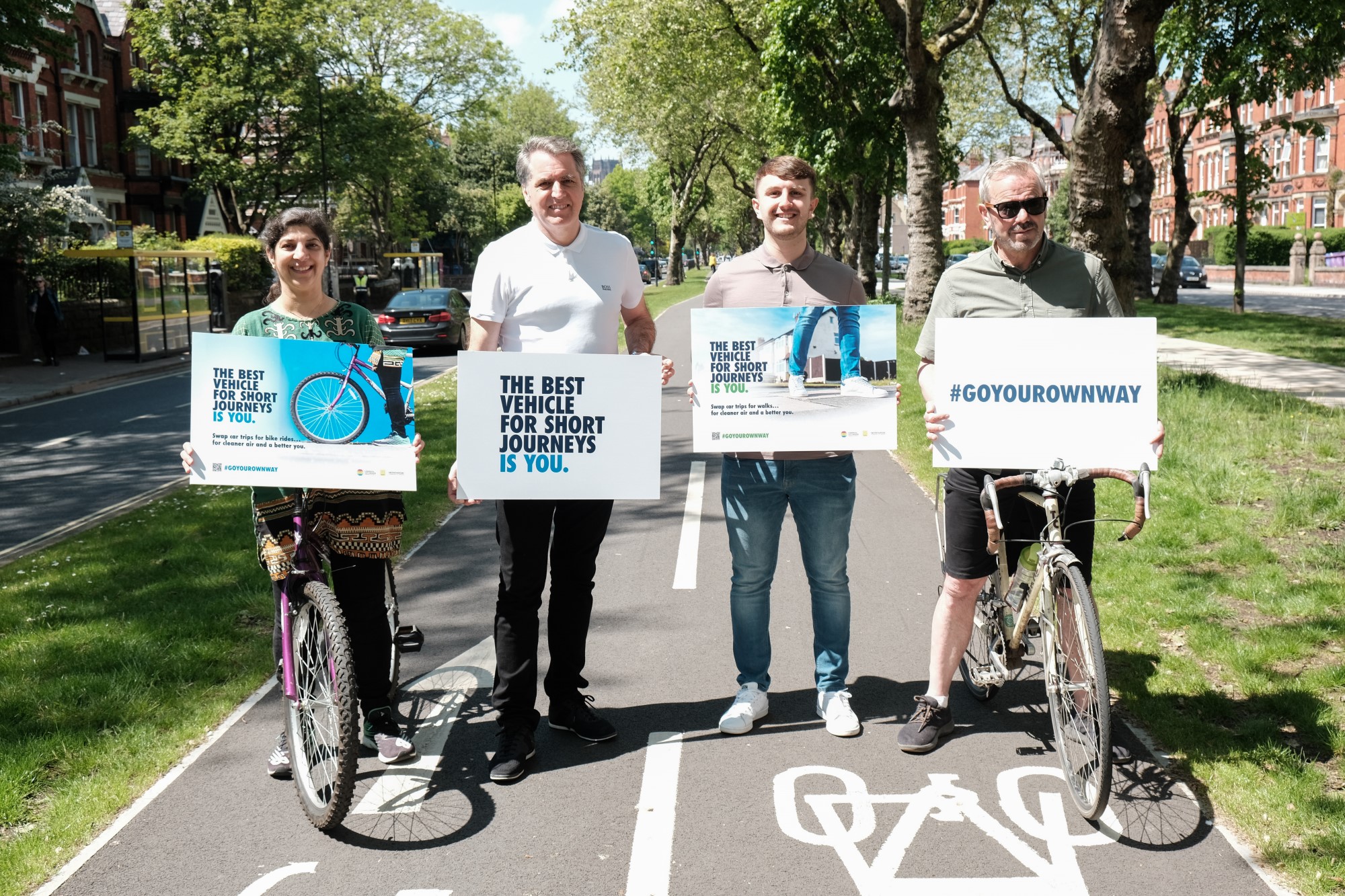 People across the Liverpool City Region are being urged to take two short journeys a week by walking and cycling – to help slash carbon emissions by 130,000 tons a year.

By everyone ditching the car for just eight short journeys a month, carbon emissions would fall by the same amount as that produced by the population of Huyton every year.

The new campaign, launched this week by Metro Mayor Steve Rotheram, calls for a revolution in the way people get about.

And he urged people to think about whether the best vehicle for their next short journey – to work or school, to the local shops or to see nearby friends and family – might be their own two feet.

In 2019 the Liverpool City Region was the first in the UK to declare a climate emergency and to commit to becoming zero carbon by 2040.

But whilst great strides have been made over the last few years to find greener ways of powering our homes and businesses, vehicle usage is the one area where emissions have continued to grow – driven mostly by more cars on our roads.

More than half the journeys taken by car in the Liverpool City Region are short ones, many of which could easily be taken by foot or on bike. The new campaign aims to get as many people as possible across the City Region to ditch the car and walk and cycle instead.

“In the past year, I know that lots of us have taken the chance to get out for walks and on our bikes and have really enjoyed it.

“It would be fantastic if we were all able to keep up these more active ways of getting about after the pandemic has passed.”

Re-elected this month with an increased majority, the Metro Mayor has pledged to use his powers to create a London-style integrated transport system and to address the climate crisis through green investment.

As part of delivering on those promises, the Metro Mayor wants to make the Liverpool City Region the best place to walk and cycle in the country. Millions of pounds have already been invested in safe, segregated cycleways and footpaths with plans to build a network of new and upgraded routes.

“I’m investing £30m in a 600km network of cycle paths and walkways across all six local authority areas – Halton, Knowsley, Liverpool, St Helens, Sefton and Wirral – all linked to our wider transport network.

“It’s a good start. But real, lasting change will take time – and I need the help of everyone across the City Region.

“If we all ditch our cars just a few times a month and start taking more trips by walking and cycling, it’ll help reduce congestion and have a massively positive impact on our environment.

As well as benefiting the environment and local air quality, active travel, such as walking and cycling, is proven to aid mental and physical health – with regular travel by bike or on foot helping to reduce symptoms of depression and anxiety and cut the risk of conditions like heart disease and strokes by a third.

“Air quality, mental and physical wellbeing, safety for our most vulnerable, Climate Change. The reasons for getting more active and reducing road traffic are clear and of benefit to all

“However, I believe the biggest reason for walking and cycling around our region is because it’s brilliant. I swapped my car for my bike thirty years ago and I have never looked back.

“Get out there, go on an adventure where you live, to the shops, to school or to work. Just a few journeys a month and you’ll see the difference. Find a different more relaxed way to get around as we work hard to make those journeys more convenient and safer by building a better network and improving our urban environment to support the changes we need to make.”

The campaign will be running throughout the summer and autumn and features real people from across the Liverpool City Region with the message that 'the best vehicle for short journeys is you'.

Naheed Tahir, 53, of Mossley Hill – whose own two feet star in the campaign – has recently taken up cycling for short journeys

“I really enjoy cycling especially the confidence it has given me on the roads. It’s great to save so much time, avoid traffic jams and not worry about having to park my car.

“I can easily and safely pop to the shops, meet friends in the park and commute to work.

“Cycling has given me independence and improved my mental health immensely. I notice my surroundings more and appreciate the natural beauty around me as well as discovering places in my city I never knew existed."

Howie Moore, 23, of Bebington is also part of the new campaign and has recently started to take more trips by foot since restrictions began last year.

“I used to get around by car a lot but recently I decided to walk every day and it’s been great.

"I would say walking is the best choice for me for short journeys particularly around where I live – it definitely saves me money on petrol. I’ve found it’s cheaper just to do some of those local journeys on foot.”